Lessons After shaping it on his wheel, the ar...

“After shaping it on his wheel, the artist trims off the excess clay to form an angular shape.” 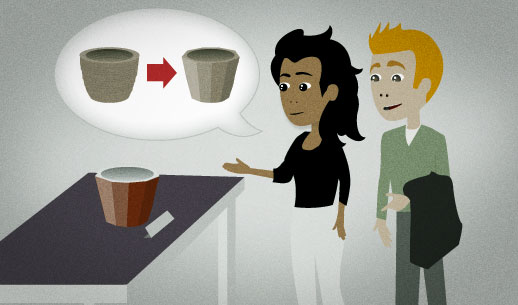 You work at an art gallery. You're describing a piece of pottery to a customer. You say this about the artist's process.

After shaping it on his wheel, the artist trims off the excess clay to form an angular shape.

The word "shape" can be used as a verb to talk about forming a certain shape out of something like clay.

trim off the excess (something)

The word "trim" something means to cut it a little bit:

You need to trim your beard.

Use "trim" by itself to describe the thing that you're cutting. But you "trim off" the part that has been cut away. For example,

I trimmed the branches.

means that you cut the branches of a bush or tree a little bit to make them shorter. However, this sentence:

I trimmed the branches off.

means that the branches have been totally cut off, and aren't attached to the bush or tree any more.

"The excess ___" means something that you don't want or need any more. In the example at top, the artist uses some of the clay to make the pottery. But there's also some "excess" clay which is not needed. That excess clay is "trimmed off".

Use the word "form" when you're making a shape out of something:

The big crowd of students formed a circle.

His mouth slowly formed the word "no".

An "angular" shape is kind of sharp, not smooth. Triangles, squares, and octagons are all "angular". Circles are not.

“It's crooked. It's tilting to the right.”

“It seems like it was only yesterday that we first met here.”