Lessons Do you take this man to have and to h...

“Do you take this man to have and to hold from this day forward, for better and for worse, 'till death do you part?” 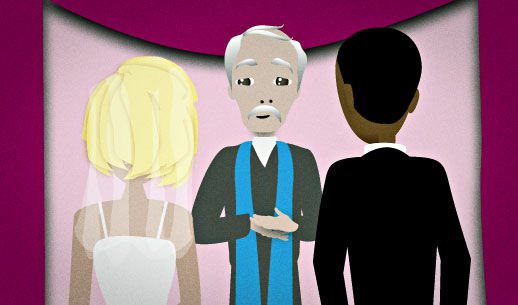 You're at a wedding. The minister has completed most of the ceremony, and now he's at the part where the couple exchange their vows and say "I do". This is what the minister asks the woman.

Do you take this man to have and to hold from this day forward, for better and for worse, 'till death do you part?

This is a standard and well-known sentence that ministers or judges use at a wedding ceremony. They ask this question to each of the people who are getting married, and each one is supposed to answer "I do." By answering "I do", they are making an official promise to their husband or wife.

These official promises are called "vows". Couples can choose to use a slightly different format for their vows. Some other common phrases that you can include are:

Do you take this man to be your lawfully wedded husband, to have and to hold...

...for as long as you both shall live?

Some couples even write their own personal vows to each other. But a lot of couples still choose the traditional version above.

I've learned to take risks and be adventurous.

But in more formal English, you can repeat "to":

I've learned to take risks and to be adventurous.

Do the same thing when you list two or more things that start with a preposition like "for". In normal spoken English:

It's important for us to set a positive example for our children, our peers, and the community.

In a formal speech this would become:

It's important for us to set a positive example for our children, for our peers, and for the community.

to have and to hold

This combination is pretty much only used together in wedding vows. It means that you are going to kind of own this person as your husband or wife.

from this day forward

This is a very formal way of saying "from now on". In other words, it means that you're going to start doing something now, and it will continue on into the future. "From this day forward" is mostly used in official ceremonies.

for better and for worse

For better or for worse, the newspaper industry is changing dramatically.

For better or for worse, we're being forced to cut our budget by 15% this year, and that's probably going to mean layoffs.

In reality, when someone says "for better or for worse..." it usually means that the situation is going to be worse, not better. :(

"Cherishing" something means that you love it very much and treat it as something very valuable. People "cherish" things like:

cherish the memories that we had together

cherish the time that you spent together

The phrase "love and cherish ___" is usually used to talk about a person's feelings about their family.

till death do you part

This is a very well-known part of the wedding vows. It means "until we die". This is supposed to mean that people who marry each other are going to stay married for their entire lives.

People sometimes use this phrase when they're talking about how long a marriage is supposed to last:

The rate of divorce continues to rise in this country, and that's really disappointing for those of us who still believe in "'till death do you part".

Are women who are being abused supposed to just stay in the relationship and put up with it until death do them part?

have at a wedding
Print this Lesson

“Can you go gather some kindling?”