Lessons Every so often I'll have a dream wher...

“Every so often I'll have a dream where I'm being chased by some kind of monster.” 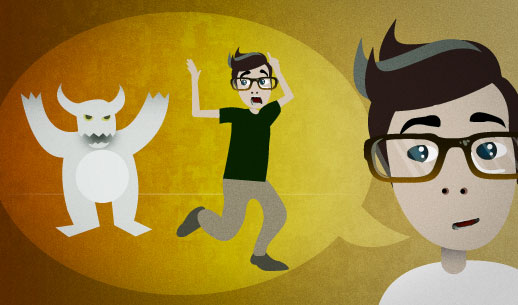 You're talking with a group of friends about your dreams. There is a recurring dream that happens to you sometimes. You describe it:

Every so often I'll have a dream where I'm being chased by some kind of monster.

Every so often (something will happen)

You can use this phrase to talk about things that sometimes happen. "Every so often" means that something happens again and again, but not very often. For example:

I run into him in the city every so often.

I don't eat sweets all that much, but every so often I'll get a craving for a bowl of ice cream.

The verb that is used with "Every so often" can either be in the present tense, or include "will" like the example above.

English speakers use the phrase "have a dream" to describe dreaming. Other languages may use words like "see" or "imagine", but in English it's always "have":

I have this recurring dream where I'm on a boat that's sinking.

You might be surprised that the speaker uses the word "where" to describe a dream. A dream isn't a place, right? Actually, there's a more formal way to say this:

Every so often I'll have a dream in which I'm being chased by some kind of monster.

But in normal conversation, "where" replaces "in which", "at which", "on which", "about which", and so on. Here are a few more examples:

I'm at the point where I can understand most of what's going on around me.

I like watching movies where you don't have to think too hard.

He bought one of those expensive coffee makers where you can precisely set the temperature of the water to a certain temperature.

some kind of (something)

The phrase "some kind of ___" can be used when you don't know exactly what you're talking about or you don't want to specify:

What's this? Some kind of stew?

I hear some kind of siren in the background.

“I'd appreciate any feedback you can give me on the content, as well as the sp...”

“Please note that these dates are tentative.”