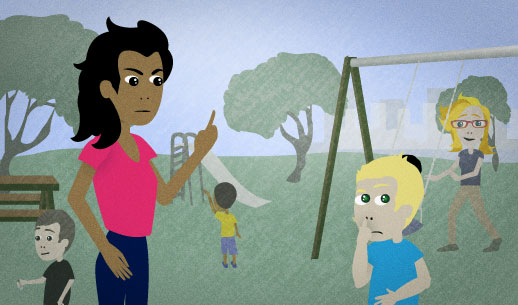 You're babysitting someone's young child. The child puts his finger in his nose. You want to scold him and tell not to do that, so you say this.

Make this sound when you see, smell, or hear about something disgusting.

Another similar interjection is "Yuck!"

"Picking your nose" means putting your finger in your nose to pull out boogers. Boogers are the greenish-gray, solid substance which builds up inside your nose.

Picking your nose is not acceptable in American culture.

The word "gross" means "disgusting". Here are some examples of things that are "gross":

A rotting egg that's been left in the refrigerator for too long.

A close-up photograph of a surgical operation.

The word "gross" is more casual and weaker in degree than "disgusting".

“Can you hold it steady for me?”

“My heart goes out to all the victims of this tragic event.”