Lessons Honestly, I feel more relieved than a...

“Honestly, I feel more relieved than anything.” 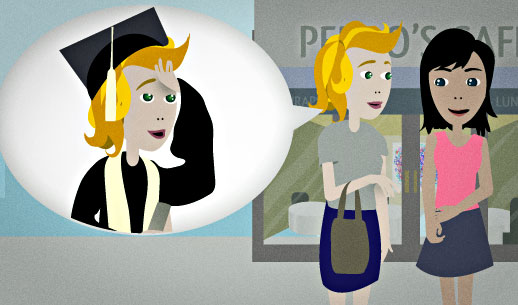 You just got your Ph.D. A friend asks you if you're proud of yourself. You feel kind of accomplished. But your strongest feeling is happiness that you can stop researching and writing papers for a while. You say this.

Honestly, I feel more relieved than anything.

When you start a sentence with "Honestly..." it sounds like you're telling your listeners a secret that you wouldn't tell other people. For example:

Honestly, I don't think I ever want to have kids:

Honestly, I don't regret quitting at all.

People usually use "Honestly..." to share things that some other people would disagree with. It can help you and your listeners to feel closer to each other.'

Another way to use "Honestly..." is to introduce an idea that you just thought of that has surprised you a little:

Honestly, I don't think I even need this jacket today.

more (adjective) than anything

In the example above, the speaker feels several emotions about getting her Ph.D. — pride, sadness that she's leaving the school, nervousness about her future, etc. But she's saying that the emotion she feels the most is relief.

Here's another example: if your baby is crying, you try changing her diaper, feeding her, holding her, etc. but she still continues to cry. You say:

I bet she's more sleepy than anything.

This means that sleepiness is the main thing that's making her cry.

You pronounce the sentence with the most stress on the adjective:

I feel more relieved than anything.

She's more sleepy than anything.

Here are a few more examples. Some of them use an adjective, but some use a noun after "more":We got you a little gift. It's nothing special. It's more a gesture than anything.

Don't worry about him. He's more hungry than anything. I'm sure his mood will improve once we get some food in his belly.

The political opposition to President Obama is more racism than anything else.

Feeling "relieved" means feeling good because a difficult problem has passed. In other words, you "feel relieved" when you stop worrying about something. For example:

I felt so relieved when the doctor told us that he was going to be OK.

Don't you feel relieved now that you have your own company and don't have to answer to a boss?

“What's with all the dry cleaning?”