Lessons I finally had to swallow my pride and...

“I finally had to swallow my pride and beg my parents to lend me some money.” 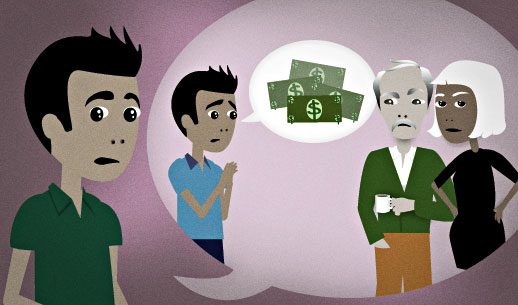 You're telling a story about a situation you had in the past: you lost your job and didn't have enough money to pay for your rent. You tried to find money to pay for it yourself, but you couldn't. So you asked your parents for money. This is how you conclude your story.

I finally had to swallow my pride and beg my parents to lend me some money.

I finally had to (do something)

Use this phrase when you're telling a story. It's useful to tell a story about this kind of situation:

In the example above, the speaker tried to get money in a few other ways. Asking his parents was the last thing that he tried.

I finally had to just cut him off.

Here are some examples of "swallowing your pride":

Having to ask your older brother for a job, after you refused his help and tried to find a job on your own for 6 months.

Admitting that you were wrong after you had an argument with your sister.

"Swallowing your pride" means asking people for help, even though it makes you feel embarrassed or lowers your status.

beg (someone) to (do something)

“I just thought I'd come out and get some fresh air and sunshine.”