Lessons I shall destroy all who dare to oppos...

“I shall destroy all who dare to oppose me!” 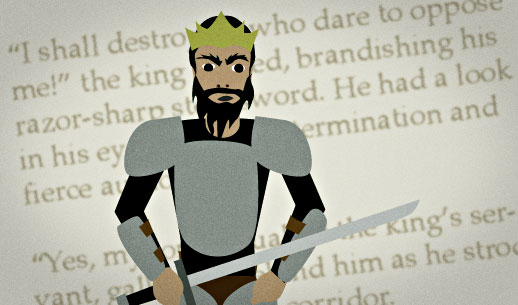 You're writing a fantasy novel. There's a character in the novel who is an evil king. He hears that the hero of the story has attacked his army, so he says this.

I shall destroy all who dare to oppose me!

I shall (do something)

To "destroy" someone can mean a few different things:

In the example above, the evil king means that he will kill the people who fight against him.

all who (do something)

We honor all who have sacrificed their lives for the sake of their country.

dare to (do something)

To "dare to ___" means to do something, even though it's dangerous, risky, or might get you in trouble.

In the example at the top of this lesson, the king says he will kill everyone who "dares to" oppose him. He thinks that it's crazy for anyone to oppose him, because he is so powerful.

Here's another example of "dare to ___". It's a common inspirational quote:

Dare to be different.

This means that you should be different from other people, even though you might get in trouble or get made fun of for it.

To "oppose" someone means to disagree with them or fight with them.

fantasy fighting formal modals in a war
Print this Lesson