Lessons I was going for something abstract an...

“I was going for something abstract and kind of edgy.” 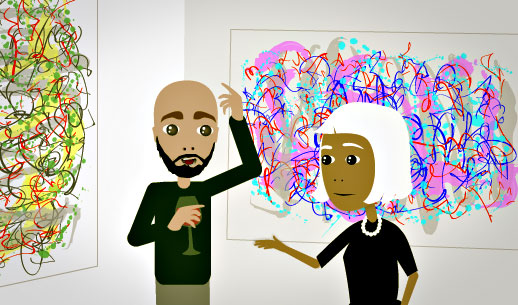 You are an artist, and you're having an art show at a gallery. You say this to explain the ideas behind your art to one of the people who came to the show.

I was going for something abstract and kind of edgy.

I was going for (something)

To "go for ___" means to try to do something. This phrase is often used when talking about what you wanted to do with art, fashion, parties that you organized, or other things that you made:

I was going for a really simple, elegant feel.

You use "I was going for..." when you've already made the thing that you're talking about. If you haven't made it yet, you can say "I'm going for..." instead. For example, when you're shopping for clothes you can say:

I'm going for a trendy look, but not too trendy.

Art that isn't clearly a picture or painting of something is called "abstract". Abstract art usually includes shapes, colors, and lines organised in some kind of pattern. It's usually hard to tell what the art is "supposed to be" a picture of. Abstract art first started to become popular in the early 1900's.

The word "abstract" means "not directly connected to real things". So a person's ideas can be abstract as well. Abstract ideas are things like "love", "society", "economics", "evil", and so on. They're not things that can be seen or felt directly.

The opposite of "abstract" is "concrete". Things that can be called "concrete" include:

Being "edgy" means that something is a little dark, rough, and aggressive. This word is used to describe different kinds of art and fashion. Here's a little more explanation:

The basic meaning of "edgy" comes from being on the edge of something. So in the example above, an
"edgy" piece of art might mean something that's shocking and hasn't been done before.