Lessons I went to a doctor and got some antib...

“I went to a doctor and got some antibiotics, but she said that it would take a few days for them to kick in.” 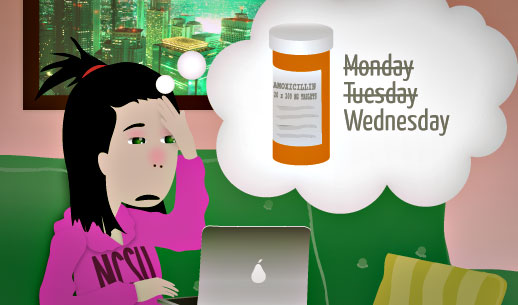 You're feeling sick with a sinus infection. You went to a doctor and got some medicine, but you don't feel better yet. You were supposed to meet a friend for dinner tomorrow evening, but you don't think you're going to feel better by then. This is how you explain the situation in your e-mail to cancel the dinner.

I went to a doctor and got some antibiotics, but she said that it would take a few days for them to kick in.

go to a doctor

When you have small health problems like colds, flus, and infections, you usually go to a doctor's office or a clinic. You can call this "going to a doctor" or "going to the doctor".

This is different from "going to a hospital". A hospital is somewhere that you go when you have major health issues that require you to stay several days. You'd go to a hospital if you're getting surgery, if you had a heart attack, or if you're giving birth.

"Antibiotics" are a kind of medicine that kills bacteria. They cure various kinds of infections.

People almost always refer to "antibiotics" in the plural form. It's rare to talk about "an antibiotic".

When something "kicks in", it means that it starts to work. This is a common expression for talking about medicine:

The painkillers haven't kicked in yet.

Something else that can "kick in" is an instinct, a feeling, or a certain way of thinking:

As soon as he heard the gunshot, his military training kicked in and he dropped straight to the ground.

And something else that "kicks in" is a retirement plan or some other kind of payment that you're scheduled to receive at a certain time:

When she turns 21, her trust fund kicks in and she won't need to work any more.

A more formal phrase with a similar meaning to "kick in" is "take effect":

The doctor said that it would take a few days for the antibiotics to take effect.

“We are working day and night to restore power to all the areas that have expe...”

“See here? I patched up that spot where the drywall was starting to crack.”