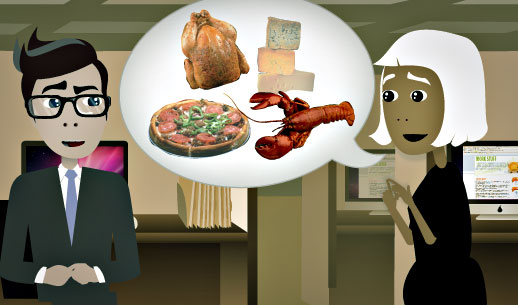 Last week you went to a great party that was thrown by one of the companies that you do business with. You're telling your coworker, who didn't go to the party, about it. You just told him that there was lots of amazing food there, and you begin to list examples.

Use "I'm talking..." in the following circumstances:

When you list things with this expression, don't use "and". Just keep listing examples, and then when you're done just stop listing things. That makes it sound like there are other items that you could also add to the list, but you're not going to say all of them.

You can just list two examples if you want, or keep listing lots of things. But it's most common to list three items.

"You name it" means "a lot of different things". In the example at top, the speaker uses it at the end of a list of different foods at the party. That suggests that there were even more other kinds of food there.

"You name it" mostly comes at the end of lists like this:

They've been to Indonesia, Malaysia, The Philippines, Singapore, you name it.