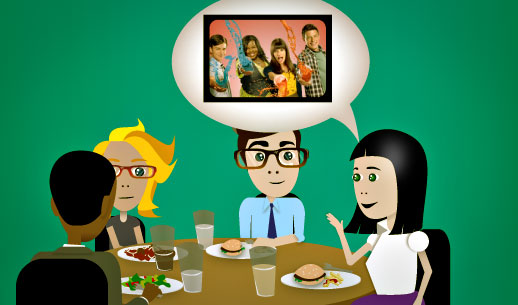 You're having lunch with a group of coworkers. The conversation turns to T.V. shows. You say this to express your opinion about your favorite show.

In casual conversation, when you want to exaggerate an action or description, you use the adverb "totally". Here are some common examples of how "totally" is used:

I'm so sorry, I totally forgot to call you!

New Orleans was totally destroyed by the hurricane.

New York is totally different than it was back in the '80s.

A slightly more formal word with a similar meaning is "completely". "Completely" could be used instead of "totally" in any of the examples above.

I'm obsessed with (something)

...obsessed with your weight

...obsessed with your appearance

The word "obsessed" doesn't have a very positive meaning when you use it to talk about someone else. But in the past few years people are using it more and more to talk about themselves. When you admit that you're "obsessed with" something, it means that you're really interested in it, and you don't stop thinking about it. For example, the PhraseMix profile page on Twitter says:

Obsessed with finding the best way to learn language.

If a person really likes a T.V. show, a comic book series, a fashion designer, etc., they might tell you that they're "obsessed with" it.

“Well, I look forward to working with you.”