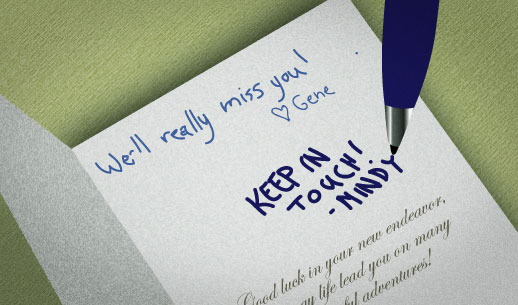 One of the students at your English language school is moving back to his home country. Some of the students contributed to buy him a gift. On the card for the gift, you want to write a nice, friendly message. You write this.

"Keep in touch" is a common phrase to use when you're permanently saying goodbye to someone, like when you:

However, people say "Keep in touch!" so often that sometimes it doesn't really mean much. If someone tells you to "Keep in touch", they probably don't expect you to call or email them.

If you really do want to "keep in touch" with someone, you might need to say or write it in a different way like this:

“I love that dry, deadpan style of humor he has.”