Lessons Oh really? I was an Architecture majo...

“Oh really? I was an Architecture major, but I minored in Political Science.” 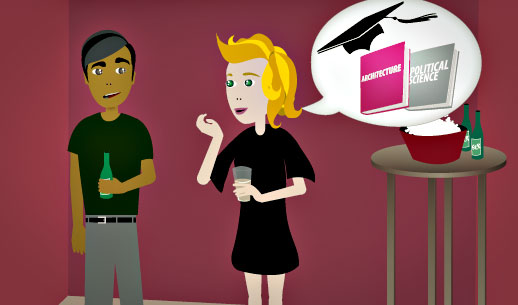 You're at a friend's party. You're talking to someone who you just met for the first time. He tells you that he studied Political Science in college. You say this because you have some similarities with him.

Oh really? I was an Architecture major, but I minored in Political Science.

The phrase "Oh really?" expresses a feeling of interest. Use it when someone tells you something new, unexpected, or interesting:

A: I'm thinking of buying a house.

Architecture is a field of work and study that deals with designing buildings. An architect creates plans, called blueprints, which tell workers how to build a building.

You should notice that:

In American universities, students choose a "major", which is the main subject that they study. Students usually have to take a few classes in a variety of different subjects: science, math, English, social sciences, etc. But most of their classes are within their major. So if you're an Architecture major, you might have to take 10-15 classes (which equals 30-45 "hours" in the American university system) on different Architecture-related topics.

You can say that you "are" or "were" a certain major:

I was an English Literature major.

You can also say that your major "is" or "was" something:

minor in (a subject)

A "minor" is like a "major" in college, but it takes fewer classes to complete. It usually requires that you take about 5-6 classes in one subject.

You can use the words "major in" and "minor in" as verbs:

I majored in Art History.

I considered minoring in French, but I would have had to stay an extra semester to finish it up.

Because a college minor is not as important as a major, it's not as common to say that you "are" a (something) minor or that your minor "is" something. People usually use the verb form instead.

Political Science is a school subject and a field of study. It deals with ideas and theories about how politics works.

You should note that school subjects are capitalized:

“Try not to draw attention to yourself.”

“That burrito I ate didn't agree with me.”