Lessons Our anniversary is coming up soon.

“Our anniversary is coming up soon.” 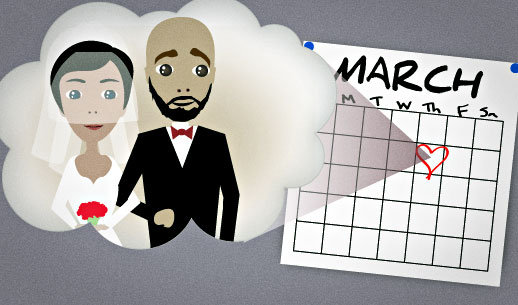 You noticed that Today is February 25th. The day that you and your husband got married was March 10th. You're a little worried that your husband won't remember, so you say this to remind him.

Our anniversary is coming up soon.

Couples usually celebrate their anniversary with gifts to each other, as well as by going out on a date together.

(something) is coming up (at a certain time)

Talk about something that is going to happen soon with the phrase "___ is coming up":

Sorry, I can't. Final exams are coming up in a couple of weeks.

Don't you have some vacation coming up soon?

The deadline is coming up at the end of this month.

These examples are all about events that are scheduled for a certain day. But you wouldn't use "coming up" to talk about things that you're not sure about, like an earthquake. Use some other phrase for those kinds of situations, like this one:

Geologists say we're due to get another big earthquake in the next five years or so.

Layoffs are likely to be announced next week.

“May I offer you a complimentary dessert?”

“This guy is taking up the whole armrest!”