Lessons She kind of perked up when I mentione...

“She kind of perked up when I mentioned Hannah's name.” 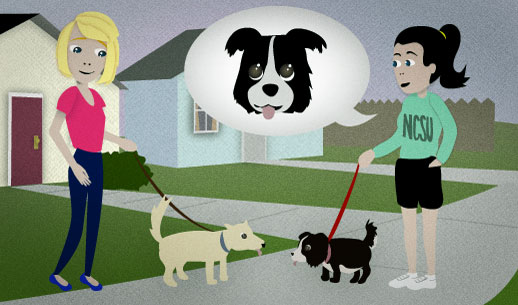 Your dog has another neighborhood dog that she's friends with. You set up a time with your neighbor for the dogs to play together. Your dog was excited about it when you came. You're telling this about your neighbor.

She kind of perked up when I mentioned Hannah's name.

When someone suddenly sees or hears something that interests them, they "perk up": they open their eyes more and pay closer attention to what's happening.

You might "perk up" in a conversation when someone talks about a topic that you're interested in.

kind of (do something)

"Kind of" means "a little" or "somewhat". All of these words are most commonly used before an adjective:

I feel kind of obligated to go.

You look a little sick. Are you OK?

It's somewhat smaller than I thought it would be.

But only "kind of" sounds right before a verb, and only in casual conversation:

I kind of wanted to go with them.

We want to move, but we're kind of waiting for him to finish school.

People sometimes pronounce "kind of" in a way that sounds like "kinda".

“You made these from scratch?”

“What did you just say to me?”