Lessons She was yelling at us and barking out...

“She was yelling at us and barking out orders.” 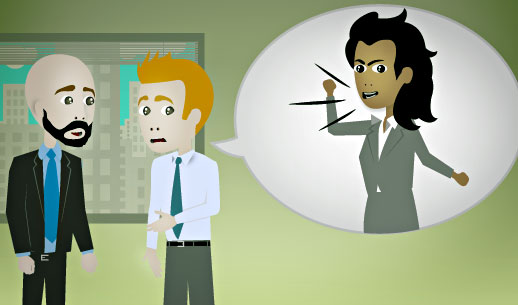 Earlier today, the Vice President of your division at work seemed to be really angry about something. You say this while you're telling a coworker about it.

She was yelling at us and barking out orders.

You "yell at" someone when they've done something wrong and you're angry at them. In most cases, a person in a higher social position yells at the person in a lower position. For example:

Ms. MacGuire used to yell at me all the time for talking during class.

I got yelled at for not calling my parents.

The meaning of "yell at" is similar to the word "scold", but English speakers almost never use "scold" except in formal written English. "Yell at" is the common way to express this.

To "bark out orders" means to command people to do things loudly, clearly, and angrily. Use this phrase to describe someone who is ordering around a whole group of people. For example:

Military officers are used to barking out orders, but for the rest of us it can seem intimidating to directly tell someone what to do.

Who does he think he is, barking out orders like that? He's not even the head chef!

The word "barking" describes the sound that a dog makes, so you can imagine that someone who is "barking out orders" is telling people what to do in short, loud bursts. This phrase has a negative connotation because most people don't like to be ordered around in this way.

The more basic expression for ordering people is "give out orders":

Valerie tends to give out orders when she comes by, but she rarely follows up on them or even remembers what she asked us to do.

“Thank you all for coming. Wow, what a great turnout.”