“The Immigration office makes you jump through all kinds of hoops to get a green card.” 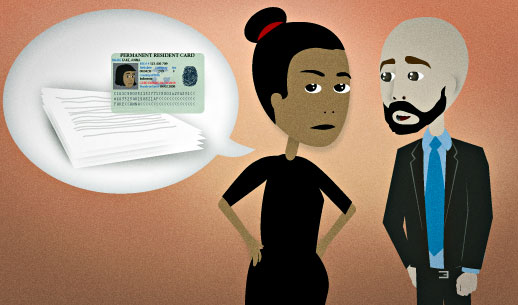 The Immigration office makes you jump through all kinds of hoops to get a green card.

"Immigration" means moving into a country.

To understand this phrase, imagine a little dog which has been trained to do circus tricks. In order to get its food, it has to jump through several hoops or rings: one big one, one small one, some very high up, and maybe one that's been set on fire.

When people make you do a lot of unnecessary work, you can say that they're "making you jump through hoops". For example, when you're applying for a green card you have to:

These steps are complicated and annoying, so you can call it "jumping through hoops."

Another example is when you try to cancel your telephone bill. The telephone company doesn't want you to quit easily, so they make you "jump through hoops."

all kinds of (something)

"All kinds of ___" means "a lot of ___" or "many different kinds of ___". In the example above, it means that people who want to immigrate to the U.S. have to do a lot of work to become a permanent resident.

We have access to all kinds of personal information about the patients.

In the U.S., the card that foreigners get when they've become legal permanent residents is called a "green card". At one time in the past, this card was green, but now it's a light yellow color.

“You have to fill out a bunch of paperwork.”

“It must be clogged.”