Lessons The jury found her 'not guilty'!

“The jury found her 'not guilty'!” 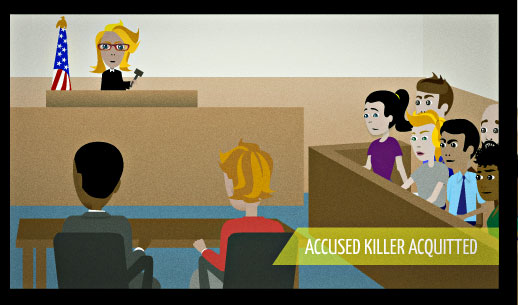 You're watching a news report about a famous murder trial. You and your roommate were talking about this case earlier today, and you both agreed that the woman who's on trial is a murderer. Now the news tells you that she has been freed. You shout this to your roommate.

The jury found her 'not guilty'!

In court cases in the U.S., a jury decides whether a person is guilty or not guilty of a crime. A jury is a group of people who have been selected from the local citizens of the city where the trial happens.

(the jury) finds (the defendant)(guilty/not guilty)

This is a common way of announcing a jury's decision in a legal trial. When a jury "finds" that someone is "guilty" of a crime, it means that they have formally decided that the person committed the crime. The jury announces their decision this way:

We, the jury, find the defendant, Jane Doe, to be "guilty" of the charge of first degree murder.

We, the jury, find the defendant to be "not guilty".

The "defendant", by the way, is the person or organization that's been accused of a crime.

The phrase "not guilty" is the opposite of "guilty". This is what an jury announces if they decide that someone hasn't committed a crime.

There's another word, "innocent", which is also the opposite of "guilty". However, there's a difference between "not guilty" and "innocent". If you're "innocent", it means that you didn't do anything wrong. So someone who's been accused of a crime will say:

I'm innocent! I swear! I didn't kill him!

But "not guilty" is a "verdict", which means that it's an official decision which a jury makes.

They acquitted her. Can you believe it?

“She is also the recipient of numerous awards, including the Pulitzer Prize fo...”

“That look she gave him sent chills up my spine.”