Lessons The video's pretty choppy on my end.

“The video's pretty choppy on my end.” 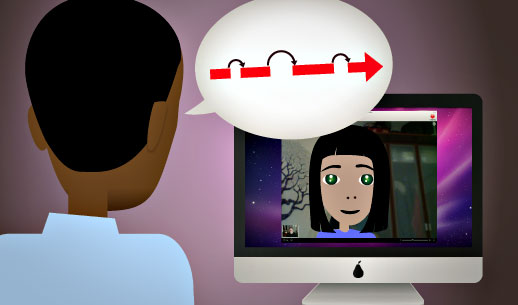 You're doing a video chat on your computer with a friend in another country. The video isn't very smooth. It plays for a few seconds, then stops for a few, then plays again. You asked your friend if the video looked OK on her computer, and she said it did. You say this in response.

The video's pretty choppy on my end.

This means "The video is ___" People often replace "(something) is" with "(something)'s". For example:

Your car's over here.

This can be a little confusing sometimes because it looks and sounds the same as the possessive form:

Your car's windshield is cracked.

"Choppy" means "not smooth". The most common use of the word "choppy" is to describe water that has a lot of waves:

The water started getting choppy, so the rescue effort had to be suspended.

When you're talking about computer video, a "choppy" video is one that doesn't move smoothly. Instead, it stops in some parts to wait for the signal to catch up. You can use it in the same way for audio recordings or telephone conversations:

I don't get very good reception here, so excuse me in advance if our conversation gets a little choppy.

my end (of a conversation)

On a telephone or video chat conversation, you call the location of each person on the conversation an "end". It might help to imagine a string that connects each of the people on the call. So each person is at one "end" of the string.

You can use "my end", "your end", "this end", and "that end" to talk about things that are happening in each location. For example:

I hear some kind of strange beeping noise. Can you hear that on your end?

It's eight o'clock here. What time is it on your end?

“I didn't want to make her feel self-conscious.”

“I'd love to go, but I don't know if I'd be able to manage it financially.”