“Their powerful flippers propel them through the water in search of prey.” 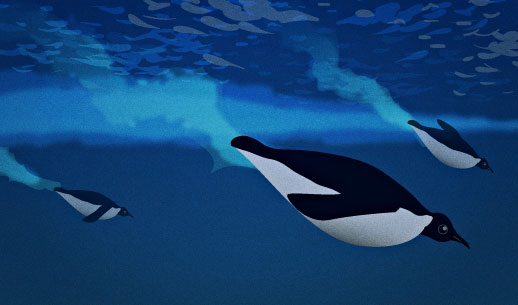 You're reading a website about penguins. It's written in a kind of scientific style. One part of the page is about how they swim. This is what it says.

Their powerful flippers propel them through the water in search of prey.

Animals that swim in the water sometimes have flippers. Thes are all considered flippers:

There's also a tool that humans use for swimming that is called a "flipper". You wear flippers on your feet when you go diving. They look like big duck feet.

Fish don't have "flippers". Instead, you call the body parts that they swim with "fins".

To "propel" something means to make it move. This is a scientific-sounding word:

Water heated into steam propelled horseless carriages long before the development of the internal combustion engine.

The force of the explosion propelled their bodies forward and onto the ground.

When you want to tell what medium something is moving through (water, air, outer space, a crowd of people, etc.), use "propel ___ through":

His momentum was so strong that he was propelled through the glass doors into the lobby.

They're propelled through the air by massive turbine jets at hundreds of miles per hour.

(do something) in search of prey

An animal that is hunting for other animals to eat is called a "predator". The animals that they're looking for are called "prey".

Wildlife documentaries and books that describe animals hunting often use the phrase "in search of prey". It means that an animal is moving around looking for something to hunt down and eat:

Bobcats prefer to hunt along ridges and will follow a ridge for miles, padding silently along in search of prey.

The snake slides along silently through the forest, in search of prey.

“Have no fear! I shall rescue you.”