Lessons They took me in the back room and int...

“They took me in the back room and interrogated me.” 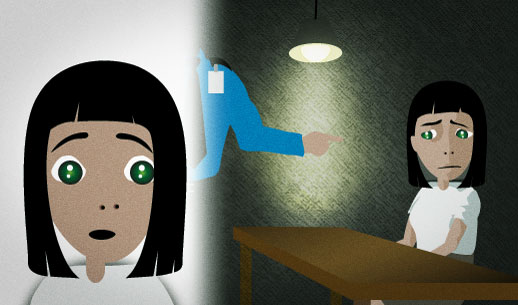 You took a flight recently and were stopped when you went through the security. You're telling a friend about it. You tell her this.

They took me in the back room and interrogated me.

A lot of businesses like stores, restaurants, and airports have public areas that customers are allowed into, and other rooms that only the staff or managers can enter. The private rooms are sometimes called "back rooms".

We associate the "back room" with dark, sneaky, secretive actions. For example, in politics, people sometimes talk about "back-room dealings". These are agreements that politicians make secretly, without telling the public. "Back room dealings" are bad and maybe even illegal.

"Interrogating" someone means asking them a lot of questions in an aggressive way.

Police "interrogate" suspects in a crime investigation. Parents "interrogate" their teenage children who have stayed out too late.

The word "interrogate" sounds negative. A less negative word to describe this process is "question":

They took me in the back room and questioned me.

Technically, the sentence above should be:

They took me into the back room.

That's because "take" is an action that starts outside of the room and finishes inside. Another example is "push":

They pushed me into the room.

However, people sometimes use "in" instead in spoken English.

“I marinated it overnight in some garlic, ginger, lime, and olive oil.”

“Thank you so much. I was at my wits' end trying to figure that out!”