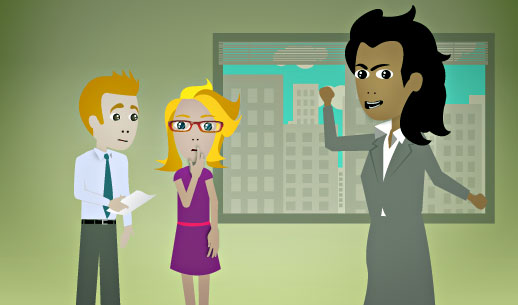 The Vice President of your division at work seems to be really angry about something. She's barking out orders, slamming doors, and yelling at employees. You make this comment about her behavior to a coworker.

When you're talking about someone at work with a higher position than you who you sometimes speak to, it's usually normal to use their first name. For example, if you say "Hi" and make small talk with the Vice President of your division once a month, it's probably OK to refer to her by her first name:

Have you submitted this to Jason for approval yet?

If you've never spoken with someone, and they're much higher up in the organization than you, you might call them by their full name instead:

I saw Jason Kaplan in the elevator this morning. He seemed to be in a good mood.

Of course, this depends on the company and the culture. The rules above are for corporate jobs in the U.S. It might be different internationally or for some jobs like university professors.

(go) on a rampage

"Going on a rampage" means to get really angry, make a lot of noise, and cause problems. A good way to imagine a "rampage" is to think of a wild animal that gets loose from the zoo. Or, if you've ever seen a "Godzilla" movie, you can imagine one of the giant monsters destroying a city.

The other situation that people use "rampage" for is when someone goes crazy and kills or hurts a lot of people. This is a sentence from a newspaper report:

Police say that Jones, age 42, went on a shooting rampage at a local shopping mall, injuring 12.

To "go on" a rampage means to start acting that way:

Chuck goes on a rampage when he sees people sitting around and not working.

While it's happening, you say that someone is on a rampage.

Watch out. Chuck's on a rampage.

“Thank you all for coming. Wow, what a great turnout.”