“We're collecting canned goods and other non-perishable items to donate to a local homeless shelter.” 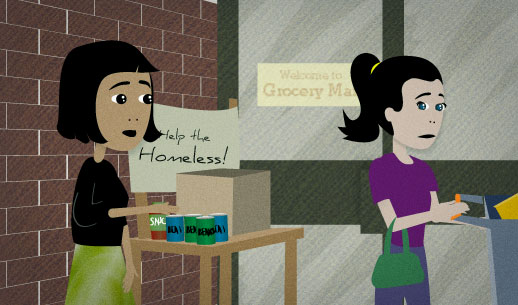 You've volunteering for a charity organization by standing outside a supermarket and asking for donations. A customer slows down as she walks by you, so she seems to be interested, and so you explain to her this.

We're collecting canned goods and other non-perishable items to donate to a local homeless shelter.

You can use the word "collect" to talk about getting money or items from people for things like:

The phrase "take up" is also used in a similar way:

Excuse me, we're taking up donations for the Haiti Relief Fund. Do you have a moment?

However, "take up" only works with money. You can't "take up" canned goods. "Collect" works with both money and physical items.

"Goods" are things that people buy. However, the word is only used in a few specific situations. One of those situations is in the phrase "canned goods", which means food that's in a can.

You usually use the phrase "canned goods" when you're talking about:

Like "canned goods", you usually talk about "perishable items" in the context of:

donate (something) to a homeless shelter

A "homeless shelter" is a place where homeless people can come to get food, a place to sleep, and sometimes other services like showers, counseling, and medical care. Homeless shelters are usually run by charities, churches, volunteer organizations, etc.

"Donating" something to a homeless shelter means giving the organization money, food, or other things to help them out. You can also "donate your time".

"Local" means "nearby". Here are some common phrases that use "local":

“Toasting the nuts really brings out their flavor!”

“Can you hold it steady for me?”