Lessons You've got to practice your pitch ove...

“You've got to practice your pitch over and over until it's really tight.” 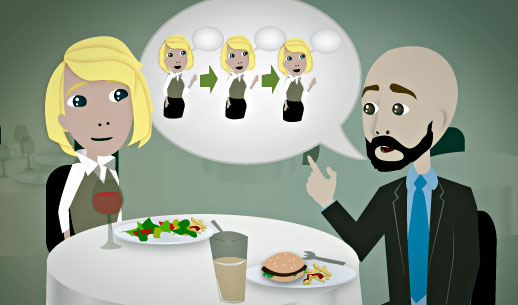 You're having lunch with a junior salesperson who's just starting her first sales job at your company. You're give this advice to her on how to be successful as a salesperson.

You've got to practice your pitch over and over until it's really tight.

you've got to (do something)

"You've got to" is similar to "you need to". They're basically the same in meaning. However, "you've got to" is more common when talking about general qualities that you need in order to achieve a certain goal. For example:

Most importantly, you've got to be passionate about it.

If you want to get into an Ivy League school, you've got to have impeccable grades and an impressive list of accomplishments.

"You need to" is more common when you're actually telling the listener what they should do, right now.

You need to go talk to Mrs. Green about that.

You need to stop spending so much on entertainment and put some of that money toward your savings.

In sales, your "pitch" is what you say to people to introduce your product or to get them to buy something. It's about 30 seconds to 5 minutes long. A salesperson's pitch is usually the same, or very similar, every time they talk to a customer. You can use the word "pitch" as a noun, like in the example at top. You can also use it as a verb:

Could I come to the next Directors' meeting and pitch my idea?

There are other kinds of "pitches" as well. For example, a writer might have to "pitch" an idea for an article to an editor. At a television studio, a TV show creator "pitches" the idea for the show to the television executives.

(do something) over and over

What wears you down is when the same mistakes get made over and over again.

I keep making the same mistake over and over.

A good speaker understands the power of a simple message that is repeated again and again.

When a presentation or performance is "tight", it means that it's been practiced a lot and seems really professional. There aren't mistakes, or times when the speaker doesn't know what to say.

The word "tight" in this situation has a positive connotation. Another word with a similar meaning to "tight" but with a more negative feeling is "slick":

Her pitch was certainly slick, but it didn't really make me want to run out and buy one.