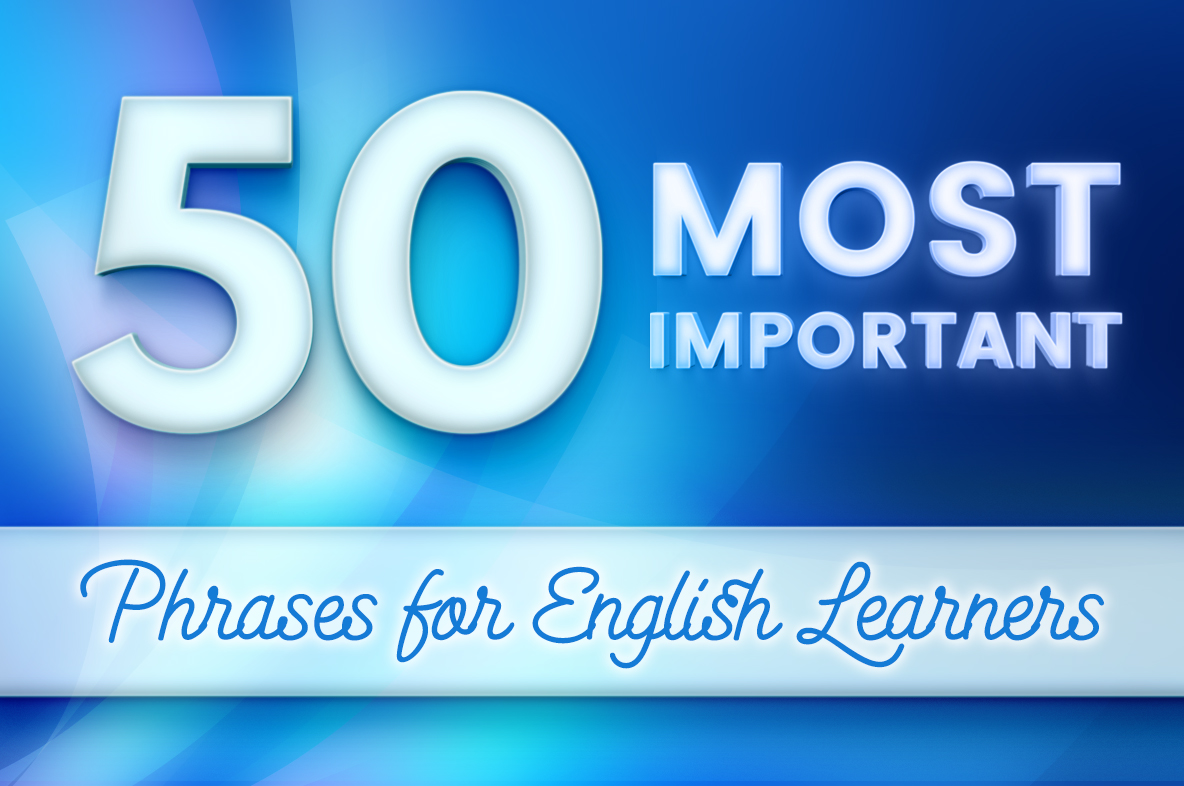 Are you traveling for business or pleasure to an English speaking country? Maybe your dream is to visit or move to America than it is important to understand the language. There are several phrases that can help you sound more like a native speaker.

Learning them will not only help you understand the language but may impress the people you are visiting.

Below are 50 common phrases to get you started:

1 Nice to meet you- This phrase is used in a Greeting. For instance “Hello, nice to meet you!” meaning you are happy to meet that colleague, future friend, etc... It is used as a pleasant way to greet someone.

2. Where are you from? – Used as an opening in “small” talk to carry a conversation, or conversation starter. Asking them what is the location they live in, or what country or city they are from. It is also used in a formal and informal conversation.

7 I don’t understand= I don’t know what you just said, or if you can’t comprehend the conversation and need clarification. It is commonly used in informal conversation but can be used in a business setting as well.

9 How does this look? – This is used when you want an opinion on the appearance of something. For instance if your friend just got a new outfit or clothing and they want your opinion they might say “How does this look?” giving you the opportunity to respond with their opinion.

10 Sorry, I’m running late – This is used if you are going to be late to a meeting or an appointment of some sort. It’s an apology for being tardy or not getting to a meeting on time. It also will let someone know you’re not going to be there at your scheduled time. It is often used in a formal conversation.

11 I appreciate that – This phrase is commonly used to let someone know you are grateful for something they have done. Or to show them you are thankful for a favor they may have done for you. For instance “Thanks so much for picking up my hours last week, I appreciate that.”

14 Adding insult to injury – This phrase is often used in everyday conversation to describe when a situation goes from bad to worse. For instance if someone had recently lost their job, now they are losing their car they may say ‘To add insult to injury, the car lot is repossessing my car.”

16 How are things? – This is an informal phrase often used to ask someone how they have been doing or how things in their life have been going. It is often used when someone hasn’t seen you in a while. Often used with friends, family, or a neighbor.

17 How’s life? – This is what you would say to a friend, or family member showing curiosity in what’s going on with them in general. It is commonly used in circles of friends.

18 Pretty good- This is used when describing how you are feeling or if someone asks you “How you are doing”. If you are feeling satisfactory you may say “I am feeling pretty good.’ Commonly used in informal conversations but can be used in some businesses situations.

20 That’s so kind of you- This is a common phrase used to show how grateful or how much you appreciate what someone has done for you, or given you. If they have done a favor for you that you were not expecting you might say, “Thanks, that’s so kind of you.”

21 I owe you one- This is a common phrase used in common conversation when someone wants you to do them a favor and implies they will do one for you in return at a later date. For instance in a work situation they might say “can you complete the report for me, I will owe you one!”

25 I agree 100% - use of this phrase is when you agree with something. If you are happy with what someone else says you might say “Yes, I agree 100 %” or in a class when a concept is explained, or even a story idea you may like you could say, “I agree with the story concept 100%”.

26 Tell me about it- This phrase can be used a few different ways for instance if you agree with something that’s being said you can say “tell me about it.” Or if a friend or colleague receives some news you might say “You want to tell me about it?”

27 That’s terrible- Is often used in casual conversation if something bad or sad has happened. For instance a friend tells you that their neighbor was in a bad accident, you might want to say “That’s terrible.” Meaning “That’s bad” Not commonly practiced in business settings or formal situations.

31 I’m absolutely starving – This phrase let’s people know you are hungry and ready to eat. It is often used in casual circles, but could be used at a meeting to let someone know you’re ready for your lunch or a break. It can be used in both a formal or informal conversation.

32 That’s a rip-off – This phrase says that something costs too much, or is too expensive. If you see something that costs more than at other stores chances are it’s a rip-off. It is most commonly used in casual conversations between friends, family, or some colleagues.

33. I’m beat – This phrase is used to describe how you may feel after a long day of work, or shopping. It means you are tired, or worn out. Often used in casual conversation the person may say after coming in from work “I’m beat, I’m going to lie down.”

34 I’m exhausted – a phrase meaning tired or sleepy. For instance when you have been working a lot of hours in a given week you might say “I’m exhausted, I’m going to bed early tonight.” This type of phrase is used in an informal conversation.

37 In no time- This phrase maybe used when something can be done quickly like; “I can do that in no time!” or meaning it’s a breeze.  This is definitely a informal conversation piece. However in some situations it can be used to answer your boss. For instance “When can you have the report done?” “I can have it done in no time.” It would mean immediately.

38 They’re too uptight – this means that they are too conservative, or stiff, too closed off. For instance “the ladies in retail are too uptight, they need to relax.’ This is something you might say in general conversation about another person or type of people. It is often used in informal situations.

39 Pass the buck- “Are you really going to pass the buck?” – passing the buck is passing the responsibility or blame to another person. For instance if you were at a meeting and someone lost an important business report and they keep blaming it on someone else, this would be passing the buck.

40 Take your time – If you are not in a rush to get something done you would be “taking your time”.  This can be used to also tell someone not to rush to get it done. You might say “It’s okay you can take your time.”

42 Take it easy- This phrase is commonly used is casual situations. It means relax or rest for instance if you have been working too hard your friend might say “Why don’t you go home and take it easy.”

45 Lost your touch- This means someone is not as good as they used to be at something. They have lost their touch. For instance you might say ‘John has lost his touch in basketball.” It is typically used in an informal conversation.

46 Sit tight – This means sit still, or wait. Best used in a casual or informal conversation. It is used like “Sit tight, I’ll be right back.” This is something you would say to a friend or colleague. However some situations it can be used in a business setting.

47 Get over it- This means to stop thinking about it, stop letting it bother you. This is a phrase used quite often in informal conversation. You might use it like “It’s been a week you should just get over it.”

48 For real? - This phrase means- honestly, or seriously. It is a statement of amazement often used with an exclamations point. Used in casual or informal conversation among friends, or colleagues for instance; “Are you for real!”

49 That’s sweet- The phrase “That’s sweet” can have a few meanings. For instance if someone has done something nice for you, you can say ‘Awe, that’s sweet.” Or if you like someone’s new car you might say ‘That’s sweet!” Typically used in an informal setting for both meanings.

50 Let’s wrap it up – This means you’re ready to go. If you’re in a meeting you might say “okay guys, let’s wrap it up!” to signal the closing of the meeting. This can be used in both a formal and informal context.