Lessons An oldish gentleman, built kind of so... 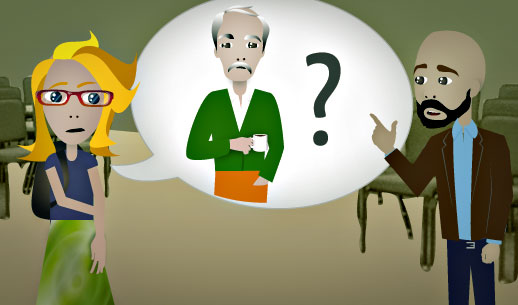 You're talking to your college academic advisor about which classes you should take next semester. He asks you if you know a certain professor. You think you might know who he's talking about, but you're not sure. You ask him this.

The suffix "-ish" means "a little bit" or "kind of". You put it on the end of an adjective, a noun, or a number. For example, if you're telling someone's age but you're not really sure if you have the number right, you say:

"-ish" is mostly used with adjectives that describe a quality that can have different amounts, like:

It doesn't sound as natural with adjectives that are "all or nothing", like "dead" or "finished". You can't be "a little" dead; you're either alive or you're completely dead. So it would be strange for someone to use the word "deadish" in a serious way.

You can also use "-ish" on the end of some nouns. There are only a few examples of this:

The word "gentleman" just means "man" or "guy", but it's a more formal word. You can use it when you're talking about a person who you don't know very well, in a situation where you're trying to seem polite and respectful. Here are some examples of situations in which you'd refer to a man as a "gentleman":

(someone) is built solidly

The way that someone is "built" refers to their body type. If a person has a lot of muscles, you say:

If someone's overweight, you can say:

And for thin people:

My brother used to be built kind of slenderly until he got married.

He has a kind of solid build, right?

A person who is "solidly" built is pretty big and strong-looking, but not extremely fat or extremely muscle-bound.