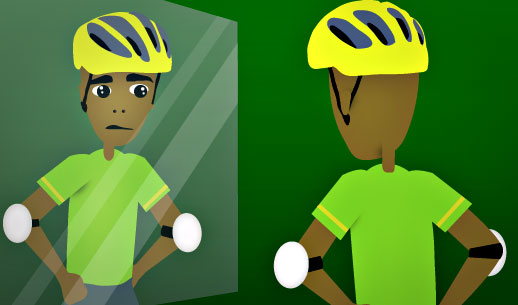 You bought a helmet and pads to wear while riding your bicycle. Now you're looking at yourself wearing them in the mirror, and you don't like how it looks. You think this to yourself.

When you want to explain how something looks by comparing it to something else, or putting it in a category, use "look like a ___":

This looks like a good spot to set up camp. What do you think?

This is different from how you use an adjective. When you're just using an adjective, you can use "look ___":

A "dork" is an uncool person. It's someone who wears clothes that aren't in style, who does things that are silly, or who has really specialized interests that other people might think are boring. You can call your close friend "a dork" if they do something that's fun but not quite mainstream. For example, if your friend goes to a comic book convention, you can tease him by saying:

You're such a dork!

The word "dork" is slightly negative, but in a fun and harmless way. If you call a stranger a "dork", they might get mad at you. But if you call a close friend a "dork", they'll probably laugh and insult you right back.

The word "dork" is similar in meaning to "nerd" and "geek". There are very small differences in the meanings of these words. English speakers like to discuss the differences between them, but there's not a clear-cut difference and they're all used in mostly the same situations.