Lessons As you're all aware, we've been force...

“As you're all aware, we've been forced to make significant cutbacks.” 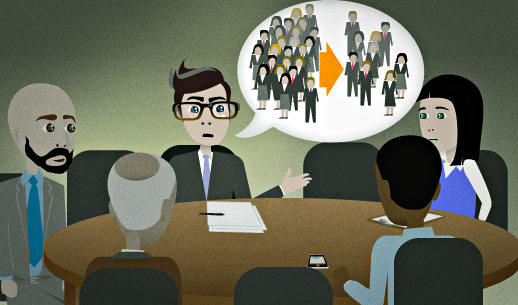 Your company recently laid off 15% of the employees. You're running a meeting with your staff to talk about how to deal with the layoffs. After starting the meeting, you begin by saying this.

As you're all aware, we've been forced to make significant cutbacks.

As you're aware, (sentence)

"As you're aware, ..." is a way to introduce a topic that your listeners or readers already know about:

As you're well aware, all requests for tech support are to go through me.

"As you're aware," is a formal phrase. A more casual version is "As you know."

(someone) has been forced to (do something)

For example, when a manager says that employees have been laid off:

As you're all aware, we've been forced to make significant cutbacks.

...it sounds as if the company didn't want to lay off those people, but had to do it for some reason that they couldn't control.

Most of the time, people use "forced to ___" to talk about things that someone had to do:

Residents were forced to evacuate.

Child soldiers in these countries have been forced to witness and carry out extreme acts of violence.

The native people were forced to convert to Christianity.

But sometimes people use this expression when they don't want to take responsibility for something that they've done.

To "make cutbacks" means to reduce the expenses of a business or government.

If we can't increase our revenues, we're going to have to start making cutbacks.

"Significant" is not only used with cutbacks, of course. It's used to talk about all kinds of numbers and percentages:

A significant number of the people we asked had never even heard of Twitter.

There's been a significant drop in the number of complaints since the new system was put in place.

As you're (well) aware, (sentence)

This expression introduces something that your reader or listener already knows, but you want to remind them of.

"As you're aware," is a formal phrase. A more casual version is "As you know,":

As you know, you're supposed to go through me for any help you need with tech issues.

You can add "well" to talk about something that your audience knows well already:

As you're well aware, we don't allow smoking in the building.

You can use this phrase when you're annoyed by someone who keeps making the same mistakes, or just to be helpful.

“I've been meaning to ask you: do you know what's up with Matt?”