“They're more energy efficient than conventional bulbs because they generate a lot less heat.” 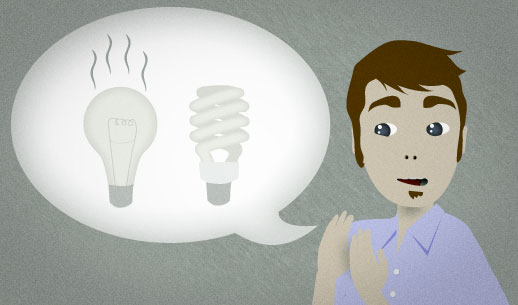 You use fluorescent light bulbs in your house to save electricity, You're explaining why you use them to acquaintance who says he doesn't know why people use them.

They're more energy efficient than conventional bulbs because they generate a lot less heat.

(something) is energy efficient

The word "efficient" can also be used in these compounds:

If you're wondering why "fuel-efficient" and "time-efficient" are hyphenated, it's because they appear before a noun. Look at this example:

The round light bulbs that most people use are technically called "incandescent bulbs". However, you can also call them "conventional bulbs". The word "conventional" means that they're the kind that are most commonly used. Some other "conventional" things include:

conventional methods (of doing something)

The word "generate" means to make or create something. For example:

The word "generate" sounds kind of technical, so it's a good choice for talking about something technical or scientific:

The sun generates 400 trillion watts of energy every second!

Photosynthesis generates ATP and oxygen as a byproduct.

“As you're all aware, we've been forced to make significant cutbacks.”