Lessons There seems to be a bit of a lag. 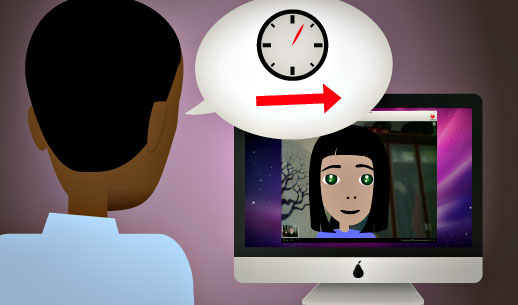 You're having a video chat on your computer with a friend in another country. When you ask her a question, it takes her a few seconds to answer. You think that's because the message isn't reaching her immediately. You make this assessment of the situation.

There seems to be (something)

You can say "There seems to be ___" when you notice something but you're not completely sure that you have identified it correctly. For example, if you are on a city street and notice that there are tons of people all walking toward somewhere, and many of them are wearing green shirts, you can say:

There seems to be a parade going on.

You say "there seems to be a parade" because you're not sure that it's really a parade. There might be some other event happening, like a concert or a baseball game, instead.

A "lag" is the period of time that you have to wait for between two things that are supposed to happen at the same time.

For example, when you speak with someone, you usually hear their words immediately as they are saying them. But when you're video chatting with them, it can take a few seconds for the signal to travel to you. So there's "a lag".

Another example of "a lag" is when you're using a computer that's really slow. If you push a button, but it takes a few seconds before anything happens, you can say:

There's an annoying lag on this computer.

You're probably familiar with the term "jet lag". Jet lag is a feeling of tiredness that you get when you travel to another time zone. You can think of it as "a lag" between the actual time in the new location and the time that your body thinks it is.