Lessons Do you know of a good burger place ar...

“Do you know of a good burger place around here?” 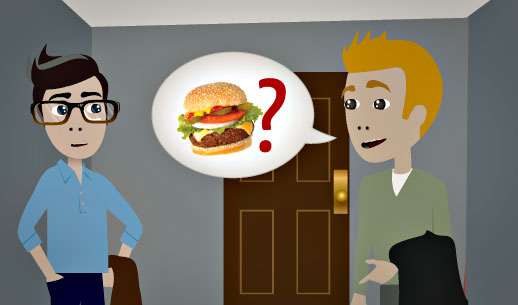 You are visiting your friend in another city. You're getting ready to go out to eat something together. Your friend asked you what you want to eat, and you feel like having a hamburger. You ask this.

Do you know of a good burger place around here?

Knowing "of" something means to know that it exists.

This is a good expression for talking about bars, restaurants, stores, etc. that you've heard about or been to, but that other people might not know of:

I know of a really cool bar a few blocks from here. You wanna go?

It's also good for talking about people that you've heard about or met only a little bit, but don't know personally:

I know of a guy who lives here in the city who brews his own homemade beer.

In this example, if you said "I know a guy who..." it would sound like this person was your friend, coworker, etc.

You can call a restaurant a "place" in casual conversation:

Have you been to that new pizza place up on 83rd Street?

Calling a restaurant a "place" is most common for shops that aren't sit-down restaurants with waiters, but also aren't big chain fast food restaurants. For these kinds of "places", the word "restaurant" can seem too formal in spoken conversation.

You can use the word "place" by itself as well, without naming the type of restaurant. For example:

"Burger" is a casual term for a hamburger.

"Around here" means "nearby" or "in this neighborhood". It's a slightly casual expression.

“You know, nothing really comes to mind.”