Lessons I hear that it's a likely Oscar conte... 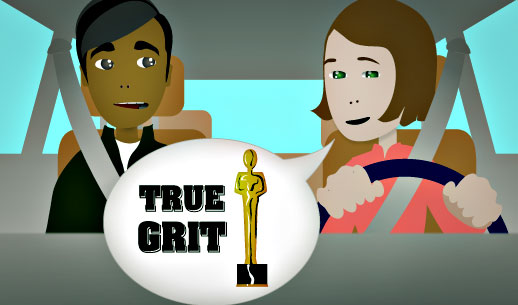 You're talking with your friend about movies that you've seen recently. Your friend says that he saw a movie which you heard might win an Academy Award. You say this in agreement.

I hear that it's a likely Oscar contender.

I hear that (clause)

For something that you've just been told one time, you'd say:

I heard that it's a likely Oscar contender.

But if you've heard the same thing from multiple people, you can use "I hear that..." instead.

"Likely" means "probably". So in the example at top, "a likely Oscar contender" means a movie that is probably going to be nominated for an Oscar award.

There are a few words that "likely" is most often used with:

I know it's technically possible, but is that really a likely scenario?

She's a likely candidate for governor in 2012.

The Oscars are awards that are given each year in the U.S. for the best film, the best actor and actress, best director, and so on. The award ceremony is shown on T.V. and is pretty popular. People start talking about what movies and performers might win an Oscar months before the nominees are even announced. The name "Oscars" is actually a nickname. The real name is "The Academy Awards".

A "contender" is someone that might be able to win something. This is a little different from a "contestant". A "contestant" is anyone who enters a competition. But the real "contenders" are only the people who have a good chance of winning.

The phrase "Oscar contender" is commonly used to talk about movies and actors who might be nominated, or might win, an Academy Award. Here are some other common types of "contenders":

a playoff contender (for a sports championship)

And here are some adjectives that describe contenders:

“Do you know of a good burger place around here?”