Lessons Have you guys covered exponents yet?

“Have you guys covered exponents yet?” 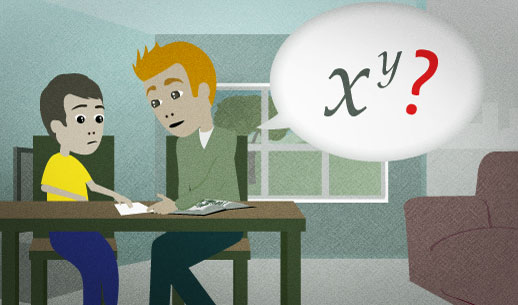 You're tutoring a middle school student in math. You want to know whether the student's teacher has taught a topic. You ask the teacher this.

Have you guys covered exponents yet?

In a class, you "cover" different topics. That means that the teacher teaches them:

In a meeting, you "cover" items that need to be discussed:

We have a lot to cover today. Let's get started.

Why does the news insist on covering these silly celebrity scandals?

In all of these cases, "covering" something means discussing things that are on a list of things to talk about.

Exponents are a topic in mathematics.

An exponent is something like 22 or 35 or 10x. You multiply the big number by itself the number of times shown in the small number (the exponent):

When you're reading an exponent out loud, you say:

addressing people math yet 日本語 have
Print this Lesson

“It can be tough to navigate the sea of information that's out there these days.”