Lessons I'm on a roll! No pun intended. 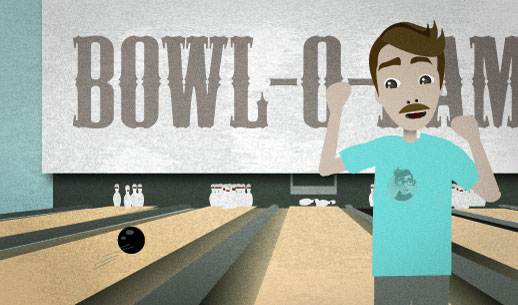 You're bowling with some friends. You're playing really well and just got your third strike in a row. You're excited, so you say this.

I'm on a roll! No pun intended.

(someone) is on a roll

When you have many successes, one after another, you're "on a roll".

Here are some situations that can be described as "___ is on a roll":

You usually use "on a roll" to talk about positive things.

A "pun" is a kind of joke. It's a joke that's based on two words that sound the same but have different meanings. For example, here's a pun from the website SillyPuns.com:

I used to be a doctor, but then I lost patients.

The word "patients" sounds like "patience". "Losing patience" means to get annoyed and not being able to wait. "Losing patients" means that the people the doctor was treating died.

Sometimes you say something that might have two meanings on accident. In the example above, the speaker said "I'm on a roll" to mean that he was doing well. But "rolling" could also refer to rolling a ball. He didn't mean to make a joke, so he said "No pun intended."

“Have you guys covered exponents yet?”

“I was thinking a shark or something along those lines.”