Lessons He is currently being held in a maxim...

“He is currently being held in a maximum security prison.” 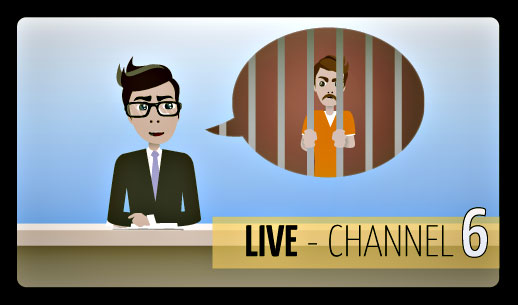 You're watching the news on TV. There's some news about a prisoner who escaped, but has now been caught again. The news anchor (TV announcer) explains this.

He is currently being held in a maximum security prison.

You use the word "currently" to tell how something is now, but also to suggest that it was different in the past or will change in the future. For example:

This suggests that the speaker has had different jobs in the past or might want to change her job soon.

"Currently" is a little formal so it fits well in written and televised news stories.

(someone) is being held (in a jail)

To "be held" in a prison, jail, etc. means that you have been captured and are locked up in there. You are not going to be released. This is the way to describe what's happening to someone who's been arrested:

He's being held on a drunk driving charge.

You can also use this phrase to describe a kidnapping or a hostage situation:

They're being held by two armed men wearing face masks.

A prison is like a jail, but it's where criminals get put for longer periods of time, usually after they have been convicted in a trial. So when you first get arrested, you're put in a jail. Later, you're moved to a prison.

There are different levels of prison, for people who have done different kinds of crimes. The worst criminals go to a "maximum security prison". This type of prison has high walls, lots of guards, and strict rules. This is to keep any of the prisoners from escaping. "Minimum security" prisons, on the other hand, are less strict. Prisoners who committed less serious crimes, and prisoners who have behaved well for several years at a higher-security prison, go there.

“No, I packed my lunch today. Thanks, though.”

“All proceeds will go to the Susan G. Komen foundation to fund cancer research.”