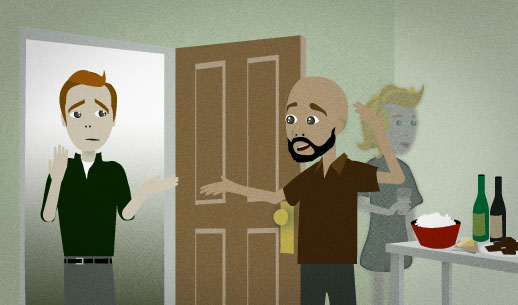 You're having a party at your house. The guests were supposed to bring some food or drink for everyone to share. One of your friends came without anything. He's apologizing for not bringing anything, but you don't want him to worry and so you say this.

People (especially men) sometimes say "Hey" before they respond to what someone has said. For example:

A: You're one of the smartest people I know.

B: Hey, I appreciate that. I don't know if it's necessarily true, but it's nice of you to say.

A: Well listen, I have to get going. I've got a meeting in a few minutes.

B: Hey, I understand.

There are a couple of reasons for it:

This phrase means "don't worry about it". That meaning comes from the fact that, when people worry, they sweat.

You can use "Don't sweat it" to calm down someone who's worried:

You can also use it as a reply when someone thanks you:

A: Thank you so much for your help.

Be a little careful using "don't sweat it" in this way, though. It sounds like something that a person says to a close friend or someone who's lower in status, like an employee.