Lessons I don't know. Too baggy, if you ask me. 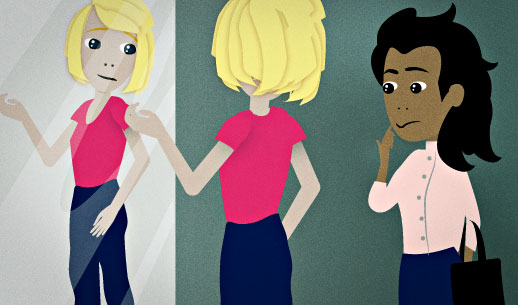 You're shopping for clothes with a friend. She tried on a pair of pants that were too tight before, but now she's trying on another pair, and they are too loose. You say this when she asks how they look.

This is an expression for disagreeing with someone or stating a negative opinion. It's polite-sounding, and doesn't seem too forceful. You can use it when you want to disagree with someone's opinion, like in this example:

Yeah, I don't know... the privacy issue doesn't really concern me too much.

In the example above, the speaker isn't really disagreeing with her friend's opinion. But she's saying something a little negative. She's saying that she doesn't like the pants. So she states her opinion in this polite way, by beginning with "I don't know."

This sentence is missing its subject. Sometimes people leave the subject out in spoken English sentences. The meaning of the sentence is:

They are too baggy, if you ask me.

"Baggy" clothes are very loose, so that there is extra fabric hanging down in places. An example of baggy clothes is the jeans and shirts that hiphop musicians and fans wear.

if you ask me

Use this expression when you want to share your opinion, but no one has directly asked you what you think.

When you use "If you ask me" at the beginning of a sentence, it can sound very bold:

If you ask me, the real problem is the way that the media has handled this.

But when you use it at the end of a sentence, it doesn't sound quite as bold.

“They're a bit snug around the waistline, don't you think?”