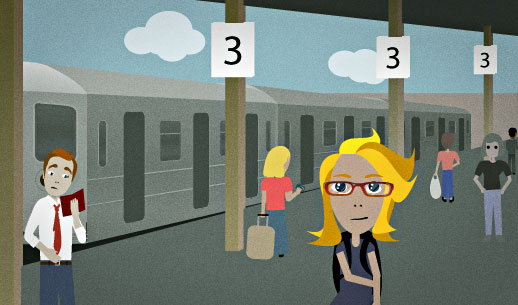 You're waiting at a train station for a train to New York. You hear this announcement as you wait.

This phrase expresses the direction that something is traveling in:

There's a Hong Kong-bound flight leaving in an hour and a half.

No, don't take the south-bound train.

Is this bus bound for New Jersey?

A "local train" stops at every stop on its line.

Some trains, called "express trains", skip some stops. They do this to get to the destination faster.

(a train or airplane is) now boarding

When a train, bus, or airplane is "boarding", it means that passengers are being let onto it.

When airport or train station employees are making announcements, they say:

But when you want to talk about the flight or train that you're taking, you say:

My flight's boarding now, so I've got to go. I'll call you later.

I think our train is boarding.

Different train tracks in a train station are usually identified with different letters or numbers.

“Word crashed while I was working on it, but luckily I was able to retrieve th...”