Lessons Word crashed while I was working on i...

“Word crashed while I was working on it, but luckily I was able to retrieve the file.” 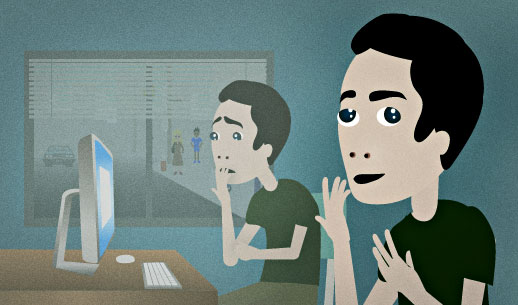 Earlier today, you were writing a resume for applying for a job. While you were writing, the computer program shut down and you were worried that your file would be lost. You say this when telling a friend about what happened.

Word crashed while I was working on it, but luckily I was able to retrieve the file.

Your entire computer can also "crash".

(something happened) while I was (doing something)

Explain two different things that happened at the same time using "while":

I found some spare change while I was looking for the remote in the couch cushions.

I called up Phillip while I was waiting for my flight to board.

In the example above, "it" means the resume document. You can imagine that someone already mentioned it before in the conversation.

luckily I was able to (do something)

This is a common phrase to use when you're describing how you solved a problem:

There was some water leaking out of the side of it. Luckily I was able to find the leak and fix it before it became a big problem.

We didn't have anyone to stay with or any kind of hotel reservation. Luckily we were able to find a decent room at the Sheraton.

To "retrieve" something means to get it back after it's been lost, hidden, or stored.

One common way to use "retrieve" is to talk about information on a computer:

New solid state hard drives are able to retrieve files much more quickly than traditional ones.

“I'm not really into the whole cutesy thing.”