Lessons I'm not really into the whole cutesy ...

“I'm not really into the whole cutesy thing.” 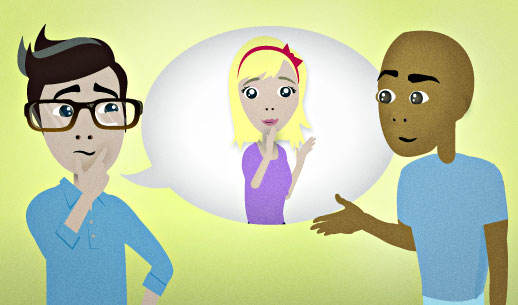 You're recently single. Your friend is suggesting people who you could go out with. He mentions the name of a girl that you both know who's very feminine and childlike. You don't want to go out with her because that style annoys you. You give him this reason for your lack of interest.

I'm not really into the whole cutesy thing.

I'm not into (something)

When you're "into" something, it means that you like it. So when you don't like something, you can say that you're "not into" it:

I've never been into baseball.

You should ask her out. She's totally into you.

A: You want to smoke some weed?

"Into" and "not into" are casual phrases. They've become popular pretty recently, but they're not too slangy.

the whole (something) thing

People use this kind of expression when they want to talk dismissively about something. Speaking "dismissively" means talking about something in a way that shows that you don't think it's important. In the example above, the speaker doesn't like cutesy women, so he calls that way of behaving "the whole cutesy thing".

You usually use a noun in this phrase:

I don't know much about the whole politics thing.

When something is attractive in an innocent and childlike way, you can call it "cute". Being "cute" is usually a good thing.

But sometimes people try to be cute, and it ends up being annoying instead. The word for this is "cutesy".

A person can "act cutesy":

Don't try to act all cutesy. I'm not lending you my car, and that's that.

You can also "put on a cutesy act". This means to suddenly pretend to be cute.

She puts on that cutesy act whenever she wants something from me.

And some people have a "cutesy look". This means that their style of dress, makeup, hair, home decor, etc. are annoyingly cute:

I want the nursery to look nice, but I want to avoid the cutesy look. You know what I mean?

“Aw, you're just saying that!”

“Word crashed while I was working on it, but luckily I was able to retrieve th...”