“I don't like you running around with that crowd.” 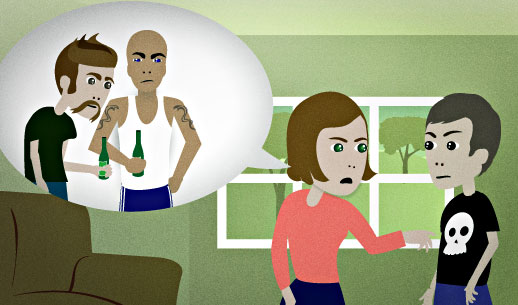 Your teenage son has been hanging out with a group of older guys who you don't like: they're rude, lazy, and like to start fights with people. You say this to your son.

I don't like you running around with that crowd.

You can talk about something that you don't like for yourself this way:

I don't like spending a lot of money on restaurants.

But if you want to talk about things that you don't like for someone else, you say it this way:

I don't like you coming around here and eating all our food! (To a stray cat.)

Of course, it's not only "I don't like" which can be followed by this structure. There are also lots of other phrases like:

I remember you asking me whether I had a boyfriend.

There's nothing wrong with us taking a little time off for ourselves every now and then, away from the kids.

running around (with someone)

"Running around" with people means spending time with them or hanging out with them, but it's associated with doing bad things:

He ought to be ashamed of himself — running around with a girl who's young enough to be his daughter!

I never got very good grades in school. I spent all my time running around with my buddies, getting into trouble.

You can also use "run around" to talk about doing bad things, without talking about who you're "running around" with:

It seems dangerous to have all these people running carrying loaded guns.

Nancy's been running around, talking trash about me to everyone. I'm gonna kick her ass!

When you call a group of people "that crowd", it sounds like you don't like them very much.

“They're a bad influence on him.”

“So were you transferred here, or did you move voluntarily?”