Lessons So were you transferred here, or did ...

“So were you transferred here, or did you move voluntarily?” 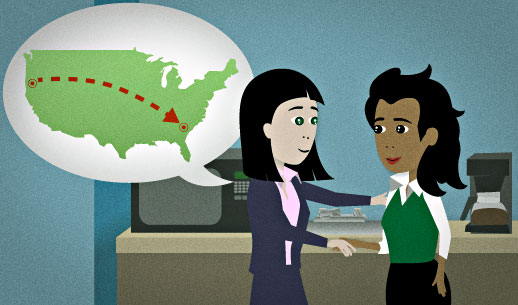 A new person just started working at your office. You've heard that she came there from another branch of the same company on the other side of the country. You've introduced yourself, and now you want to know if she chose to move to your branch or was told to come there. You ask her this.

So were you transferred here, or did you move voluntarily?

"So" is a good way to start a question when it's on a new topic. In the example above, the speakers were just introducing themselves and making small talk. The word "so" shifts the conversation into discussing why the new person moved to that office.

Here are some other examples of "so" used to start a conversation or introduce a new topic:

So have you done your taxes yet?

So how've you been?

(someone) was transferred (to somewhere)

To "be transferred" means that you are sent to work in a new department or location. For example, if you work at an office in San Francisco, but your boss asks you to go work in the Atlanta office instead, you can describe it by saying:

I was transferred from San Francisco to the Atlanta office.

She was transferred to Central Production.

And there's also the case of athletes. When they're "transferred", it means that they have to go to play for a whole new team.

Being transferred is a decision that's made by a person's bosses. If you ask to move to a new office or department, you can say that you got a transfer.

Doing something "voluntarily" means that you do it by your own choice, rather than being forced to do it. That can either mean that you wanted to do it, or that you accepted someone's request.

Here are some other examples of how to use "___ voluntarily":

Officials today expanded the evacuation area around Fukushima from 12 to 19 miles, urging residents to leave voluntarily.

There's been some speculation as to whether Griffin resigned voluntarily or was forced out of the company.

“I don't like you running around with that crowd.”

“You have pretty obscure taste in music.”