Lessons I guess I'll thaw this out. 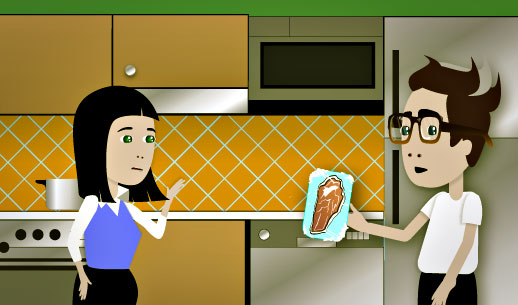 You're discussing what to make for dinner. You have a frozen steak that you can make. You decide that you should cook it, but you need to warm it up first. You say this.

I guess I'll thaw this out.

"I guess..." can be used to announce a decision that you're not sure about, or not enthusiastic about. In the example above, you're not very excited about cooking the frozen steak, but you don't have anything better to cook so you say "I guess..."

As another example, imagine that you're having dinner with your extended family. People are working on cooking, and you don't have anything to do so you say:

I guess I'll set the table.

"Setting the table" means that you put all the dishes, glasses, napkins and silverware out on the table.

Another similar use of "I guess" is to agree with someone while showing that you don't completely want to agree. For example:

A: Are you OK with Chinese food tonight?

And "I guess" is also useful for showing someone that you've changed your mind about something:

I guess I might as well stick around and have one more drink.

The meaning of the word "thaw" is similar to "melt". But when something melts, it means that that thing turns into a liquid:

The ice is melting.

Compare this with "thawing", which also means to become unfrozen. However, when something "thaws", it doesn't turn into a liquid. Instead, it just becomes softer:

The chicken is thawing.

We'll start preparing for our garden when the ground thaws in early spring.

“Do they suspect foul play?”