Lessons I have this recurring dream where I'm...

“I have this recurring dream where I'm on a boat that's sinking.” 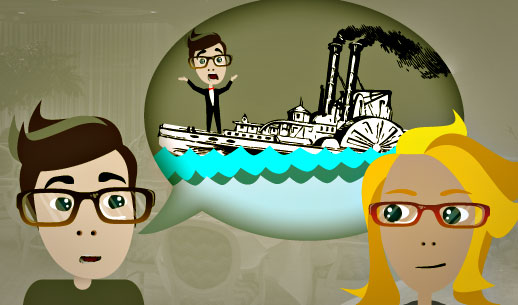 You and a friend are talking about the topic of dreams. There's a certain dream that you often have. You tell your friend this about it.

I have this recurring dream where I'm on a boat that's sinking.

English speakers use the phrase "have a dream" to describe dreaming. Other languages may use words like "see" or "imagine", but in English it's always "have".

A "recurring dream" is one that you have over and over again. It's usually one particular situation that you've dreamed about several times. Some unlucky people have a "recurring nightmare", which is a frightening dream that they have again and again.

The word "recurring" means "happening again and again in the same way". It's also used in these phrases:

To "sink" means to fall downwards in the water.

What's the difference between "sinking" and "drowning"? First, only people can drown, while both objects and people can "sink". Second, "drowning" means to get caught under the water so that you can't breathe until it becomes dangerous.

When a boat or a ship sinks, it starts to get water inside and gets lower and lower in the water.

boat determiners dreams (while sleeping) 日本語 have
Print this Lesson

“You could have killed someone!”

“How is that my responsibility?”