Lessons Is there anything in particular you'r...

“Is there anything in particular you're in the mood for?” 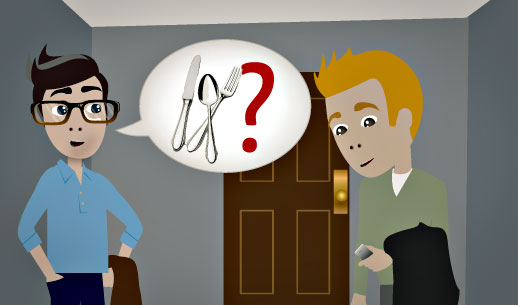 You have a friend visiting from out of town. You're getting ready to go out to eat something. You know of some good places to eat, but first you want to check to see if your friend wants to eat a certain kind of food. You ask him this to help with your decision.

Is there anything in particular you're in the mood for?

"In particular" means "specifically" or "especially". If you want "something in particular", it means that there's one specific thing that you want.

So, for example, if you're talking about food, there's a difference between these sentences:

I don't want anything.

I don't want anything in particular.

(someone) is in the mood for (something)

A "mood" is a temporary feeling that you have, which normally lasts a few hours. For example:

In this example, you're saying someone has been angry or upset for a few hours or for a day or two.

When you say "I'm in the mood for ___", it really just means "I want ___". But saying you're "in the mood for" it makes it sound like it's a temporary feeling. This works well when you're talking about food, because you want different food on different days, depending on how hungry you are and what you've eaten recently:

I'm in the mood for something light.

Here are some examples of this construction:

Is there a day when we could meet and discuss this in depth?

Is there a certain size you're looking for?

Is there something you wanted to tell me?

Use this when you want to ask about whether a certain kind of person, thing, or idea exists.

In the example at top, you're not sure whether your friend is in the mood for a certain kind of food. And you don't want to make your friend decide where to go. You just want to be polite by checking to see if he has a strong preference first. Asking "Is there anything in particular...?" will give your friend the freedom to choose what he wants to eat, or to let you pick something if he doesn't care.

food friend asking a question there existential 'there'
Print this Lesson

“This color really goes well with your skin tone.”