Lessons It's imperative that you keep up with...

“It's imperative that you keep up with the reading.” 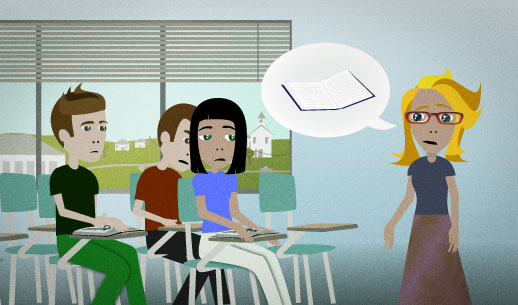 You're a college professor. You're talking to a new class during the first week of school. You want to make sure that the students understand how important it is to do the reading assignments you give them, so you say this.

It's imperative that you keep up with the reading.

It's imperative that (something/someone)(do something)

The word "imperative" means "necessary" or "extremely important". It's a really intelligent- and academic-sounding word, which you might hear from teachers, in a business meeting, or in a blog post about economy or politics.

The grammar that comes with "imperative" is a little tricky. You say "It is imperative that", and then follow it with a clause that's in a specific tense like this:

It's imperative that I speak with him right away.

It's imperative that he understand what's at stake.

It's imperative that Russel not be allowed to take control of the committee.

It's imperative that the U.S. find a way to repay some of its foreign debt.

The verb is always in the present tense, and it doesn't change to agree with the subject.

keep up with (something)

"Keeping up with" something means doing it quickly enough and often enough. The opposite of "keeping up" is "falling behind".

If you're running with someone, "keeping up" means that you run fast enough to stay with other people. In the example at top, the teacher wants her students to read a little every day or week. That's because, if they wait until too late, there will be too much left for them to read and they will "fall behind".

You can also talk about "keeping up with" news and with people who you used to know:

I generally try to keep up with what's going on.

“See here? I patched up that spot where the drywall was starting to crack.”