Lessons He claims to have been abducted by al... 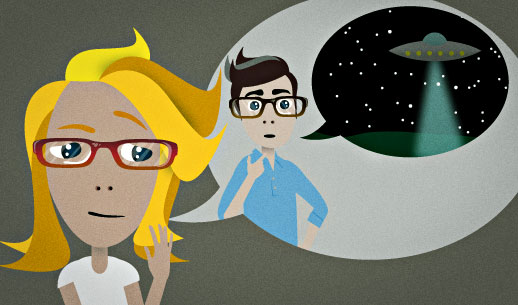 You're chatting with a coworker about your uncle, who's a pretty strange guy. He's told you that aliens from outer space kidnapped him. You tell this to your coworker.

He claims to have been abducted by aliens.

(someone) claims to (do/be something)

Use "claim to ___" when you want to tell what a person said, but you also want to suggest that you don't believe them, or don't know if what they said is true. For example:

I once knew a guy who claimed to be able to remember every telephone number he'd ever called.

They claimed to be police officers, so I let them in.

They claimed that they were police officers, so I let them in.

Phrases that end in "to" like "claim to ___" have a little different structure from normal sentences:

He knows Arnold. -> He claims to know Arnold.

(someone) was abducted by aliens

To "abduct" someone means to "steal" a person. Another word for this is "kidnapping" someone.

There's a well-known rumor that aliens sometimes take people out of their homes or cars into the aliens' spaceship. In the spaceship, they do scientific experiments on the people. This situation is called an "alien abduction". You almost always use the word "abduct" instead of "kidnap" when you're talking about aliens. It's also common when you're talking about people being taken during a war:

The two American journalists who were abducted in Gaza were freed two weeks later.

“It's imperative that you keep up with the reading.”

“They can hold you indefinitely without a trial.”