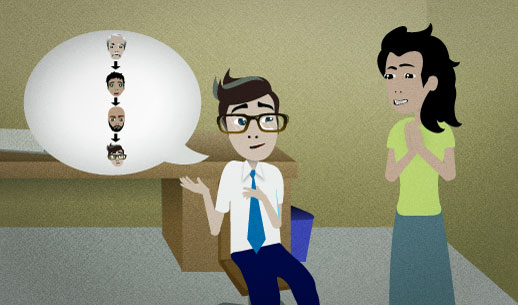 At work, a member of another department suggests a change. You think it's a good suggestion, but you can't agree to it because you don't have the power to make the change. One of your bosses will need to agree to it. You say this.

It's not up to me; I'm way too far down on the totem pole.

(a decision) is up to (someone)

You can say that a decision "is up to" a certain person. This means that this person gets to make the decision. For example:

A: What do you want for breakfast?

When you say "it's not up to me", it means that you don't have the authority to male a decision; someone else has to decide.

(someone) is (somewhere) on the totem pole

A "totem pole" is a large wooden pole with shapes of heads cut into it. The heads are stacked on top of each other. Totem poles were originally carved by native tribes in the northwest region of North America.

Describing someone as "___ on the totem pole" is casual but not too casual. It can be used in some formal situations too.

“Hopefully I can bring my GPA up to at least a 3.0 this semester.”