Lessons Ma'am, it seems to be six pounds over...

“Ma'am, it seems to be six pounds over the allowed weight. There will be an additional overweight baggage charge for that.” 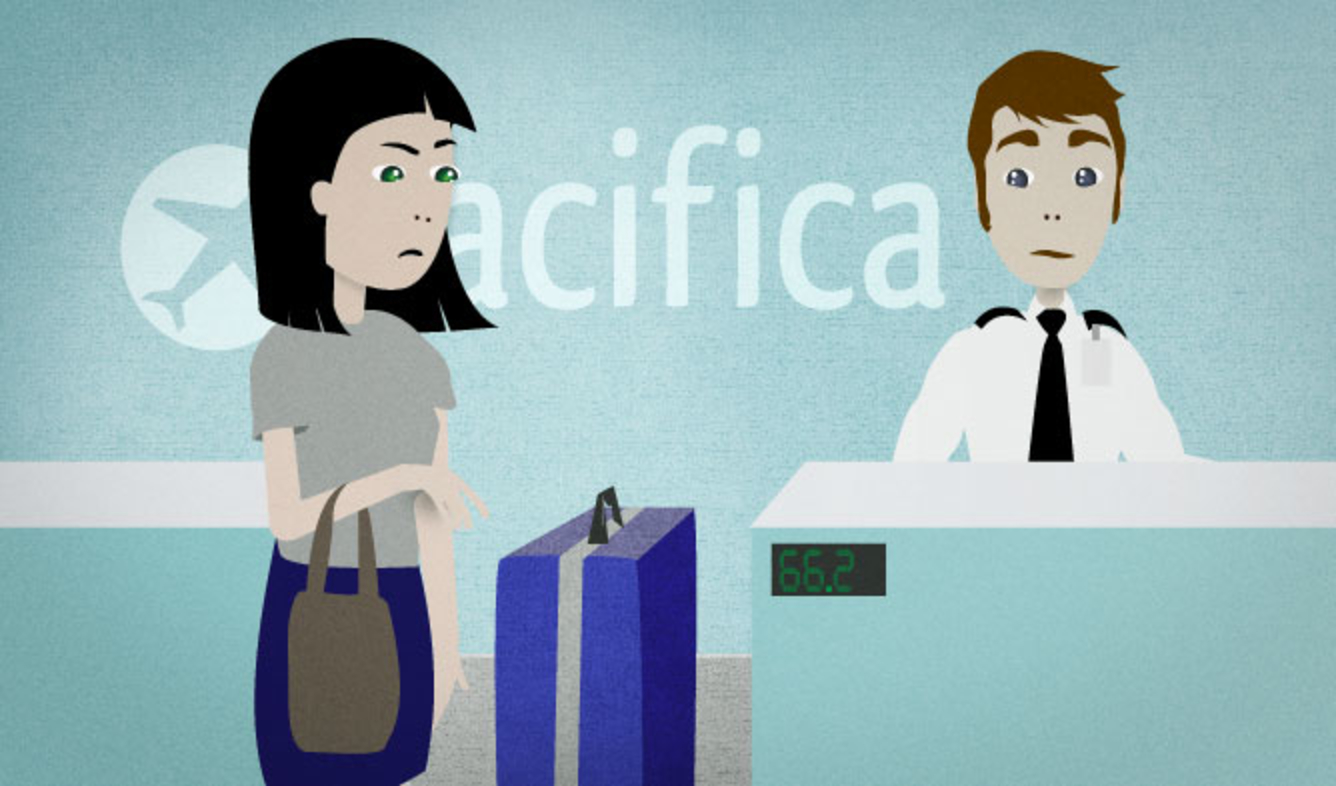 You work at the checkin counter at an airport. A customer wants to check in her bag, but when you weigh it, it's too heavy. You have to tell her that she's going to need to pay extra.

Ma'am, it seems to be six pounds over the allowed weight. There will be an additional overweight baggage charge for that.

(something) seems to (do, have, or be something)

You can say that something "seems to be ___" when you notice something but you're not completely sure that you have identified it correctly. For example, if you're video chatting and it takes her a few extra seconds to answer your questions, you can say:

You can also use "seems to..." to politely point out a problem.

For example, imagine that you're paying for a shirt that you buy at a department store, and you give the cashier some cash. But after he counts it, he says to you:

You seem to be a bit short.

That means "You don't have enough money." But the cashier just says "You seem to be..." to be polite. "Seems to..." is a way to act like you might be wrong about what you've seen or heard, even if you're actually sure that you're correct.

The word "baggage" means suitcases, bags, and other things that people take on trips.

Airline and airport employees use the word "baggage". Passengers don't usually call it "baggage", though. They call it "luggage" or "bags" or "suitcases".

"Pounds" are a unit for measuring weight in the U.S. One pound is equal to about 0.45 kilograms.

"Ma'am" is a title that people use to address a woman. It's the female equivalent of "sir".

This word is used differently in different English-speaking regions. Throughout most of the U.S., employees at banks, airports, post offices, and so on call female customers "ma'am" as a sign of respect. Students also traditionally call their female teachers "ma'am".

In the southern parts of the U.S., "ma'am" is even more common. Some men call any older woman that they don't know "ma'am".

"Ma'am" was originally short for "madam", but people don't really think about that when they use this word in modern times.

"Allowed" is used in this way in a few other expressions, like "allowed deductions" (on a tax form) and "allowed dosage" (of a medicine).

"Additional" means "extra" or "more", but it's more formal. Employees in customer service jobs use "additional" when speaking with customers sometimes. You can also find "additional" in official letters written to customers:

If you have any additional concerns, please do not hesitate to contact me.

Some examples of different names of charges include:

In most cases, "fee" can also be used instead of "charge".

customer fees formal luggage there will airport
Print this Lesson

“There're some good restaurants around here.”

“This is just a polite reminder to please notify me whenever you update the ex...”