Lessons Over time, crud starts to build up in...

“Over time, crud starts to build up in the engine.” 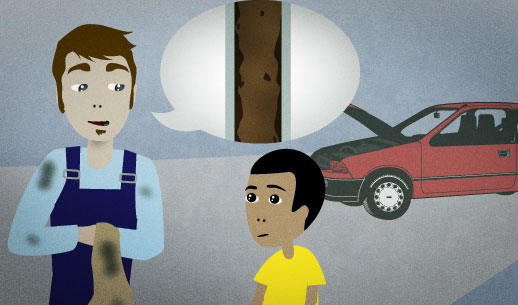 You're showing your son how to change the oil in your car. You want to explain why you need to change it. You say this.

Over time, crud starts to build up in the engine.

over time, (something happens)

Use the phrase "over time" to describe how something changes, little by little, as time passes. For example:

Their marriage was arranged by their families, but over time they grew to love each other.

Over time, her demands became more and more unreasonable.

"Over time" can come before or after the action that's associated with it:

You'll get used to it over time.

"Crud" is kind of like "dirt". But while "dirt" is technically stuff that comes from the ground, "crud" could be anything. "Crud" could be things like:

Something that "builds up" becomes stronger or thicker over time by gradually adding more and more. For example:

No one cleans over there, so the grease just keeps building up.

You have to gradually build up a base of clients.

In the example above, the speaker wants to explain that crud gradually becomes thicker and thicker inside the car's engine.

Some other things that also "build up" include:

“Aw, look at the baby holding her stuffed bunny!”

“You can hear the gas coming out when you turn the knob, but it doesn't ignite.”